What Are We Valuing? 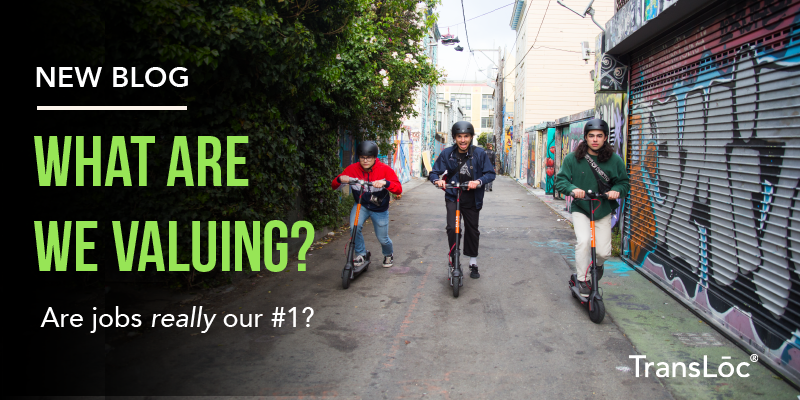 The Triangle region of North Carolina where I live recently learned that we struck out on two coveted high-tech campuses: a huge Apple campus (Austin was the eventual winner) and Amazon’s 2nd headquarters (HQ2) that went to NYC and Northern Virginia. Amazon’s charade of a selection process for HQ2 highlighted just how focused government leaders are to the promise of jobs for their communities. In the pursuit of HQ2, cities offered up everything from free land worth $100 million to a refund of employees income taxes to joint control over spending the taxes collected.

The whole process has made me wonder what exactly economic development is and who it is for. At its core, with the exception of the occasional home-grown company that uses incentives to stay where it is, it seems like economic development strategy is a simple equation with the common variable being jobs.

But the fundamental assumption baked into that economic development equation is that jobs are what our community values. Even though I am in a privileged position of having a job, it seems to me that jobs shouldn’t be the most dominant criteria for economic development. Sure, jobs are great. But, aren’t they just a means to an end and not an end unto themselves?

Having a job allows us to have the resources to enjoy the richness of our communities, to create a home of our own (whether an apartment or house), and to contribute to the vibrancy of our communities by making tomorrow better than today. The end is not a job, but instead a community worth living in - with happy people, a lively community, access to green space, and the means to get wherever we want easily and efficiently whenever we want.

It’s obvious why communities focus on jobs as an economic development tool. It’s probably easy to find money for economic development incentives when you are theoretically paying for them from the community’s growth (though it doesn’t always work out that way). And, of course, job recruitment announcements give your local politicians an easy photo opp. Still, there is already pressure on communities to think differently about how cities attract new jobs. With Amazon’s HQ2 initiative, we’ve seen everyone from academics to think tankers take issue with how cities attract jobs by recommending going after the guppy and not the whale.

But even if there is a change to how jobs are recruited, the equation presumes that the most important thing is the jobs and not what the jobs can create. I’m sure there are many in the economic development community that value more than just the jobs themselves, but it’s a little like Maslow’s famous hammer: “I suppose it is tempting, if the only tool you have is a hammer, to treat everything as if it were a nail.” And many of the people who do economic development are siloed so that they are evaluated on the jobs created, but not any of the follow-on effects.

Further complicating the equation is that competition between cities is a key factor that impacts job recruitment. There seems to be a perception that there is only a finite number of jobs and thus cities need to do everything in their power to recruit the jobs to their community, when in reality entrepreneurs are creating new jobs every day.

This phenomenon echoes what I saw in my former career in the sports industry. My undergraduate honors thesis tried to understand who benefited from public financing of Major League Baseball stadiums (hint: no one but the team owners). I later worked as a consultant to the New York City Economic Development Corporation on financing from the city of New York to recruit the National Basketball Association’s New Jersey Nets to a new arena in Brooklyn, itself a beneficiary of economic incentives.

What if our city and community leaders had a framework to use that evaluates more than simple economics? This seems to be the thought behind the concept of the “shared value” model that Portland is implementing via its economic and urban development agency Prosper Portland. The approach ensures that while the company benefits from economic development incentives, so does the city. For instance, in exchange for a tax incentive, Jaguar Land Rover is “partnering with the local startup community on inclusive entrepreneurship programs, identification of career ladder opportunities for underrepresented populations, and diversity goals around hiring and training underrepresented populations.”

This simple acknowledgement that jobs mean much more than just jobs can go a long way to help build the kinds of vibrant communities that we want.

We are seeing a similar disconnect take place right now as the burgeoning “micromobility” movement challenges the existing status quo of how people move about cities. The electric scooters, electric bikes, and dockless bikes that make up the micromobility movement have had the fastest technological adoption ever. Faster than TNCs (Transportation Network Companies like Uber or Lyft). Faster than the Internet. Faster than Blackberry, Android, and the iPhone.

This rapid adoption has uncovered a number of challenges. Many cities are finding that their existing statutes don’t comprehend the new business models and public access requirements of micromobility. These micromobility options live in a netherworld where they don’t necessarily belong on the sidewalk but also may not be legal on the road or bike lane either. In addition to these nuances, micromobility companies aggressively pursuing new markets have forced cities to create policies in order to regulate these new modes. These policies range from data requirements to caps to upfront and per-use payments.

And while it makes sense that there is some acknowledgement to the overhead of new mobility modes on our streets that use our public space like sidewalks and curb space, the hurdles that cities are throwing at these new modes obscure the end result: these micromobility options are providing immense value for the citizens of cities, especially since most trips in cities are less than a few miles.

When considering how micromobility allows for the movement of more people through smaller spaces in dense cities and contributes net positively to the city, shouldn’t we be reducing hurdles, not increasing them? What kind of perverse incentive process is that, especially considering how much the general public subsidizes individual car use, which is simply not sustainable? This disconnect is exacerbated by the fact that almost all municipalities and regions in North America lack a coordinated agency that oversees all of the area’s transportation modes so there is no one to ensure that micromobility fits into a larger mobility vision for a community.

Instead of the current focus on control (use fees, caps) in the micromobility dustup, the equation should be expanded to consider all of the positive outcomes of micromobility.

Similarly, on the economic development front, an equation that includes more than just one variable of jobs, but all of the other facets of a community that make it worth living in would look quite different:

Community and Company working together to achieve these collective outcomes

Instead of reacting to the private sector, the right step is for cities to first proactively define the community they want and then connect with private sector companies that buy into that vision of their community. This expands the equation beyond a simple common variable and ensures that the private sector--whether scooter company, professional sports team, or a trillion-dollar high-tech company--values the same thing as the community.