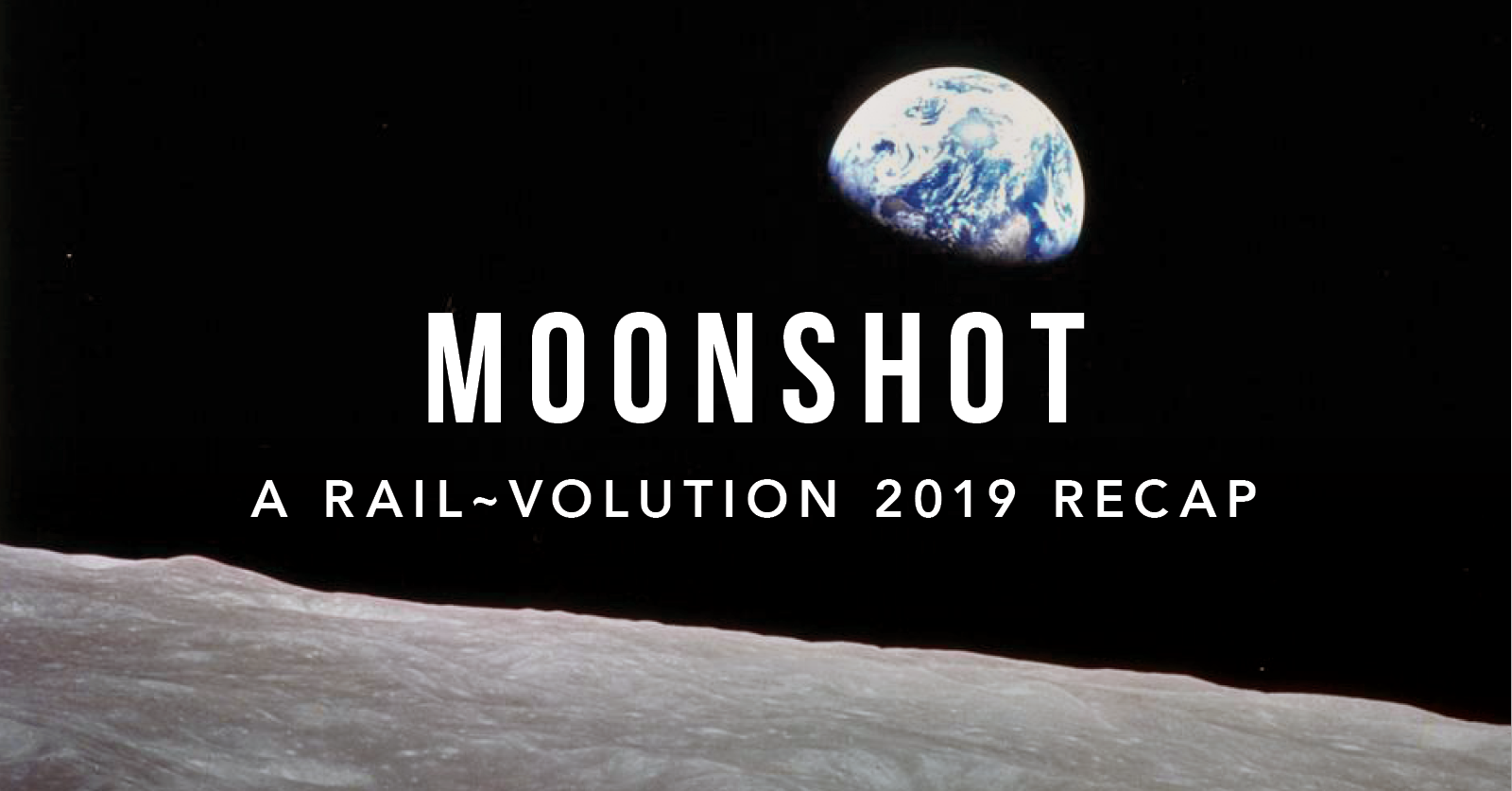 On my way to attend Rail~Volution last week in Vancouver, British Columbia, I finished Robert Kurson’s excellent new book “Rocket Men.” The book tells the true story of NASA’s ambitious plan to dramatically accelerate the plans for the Apollo 8 mission to circumnavigate the moon to provide critical intelligence for a future lunar landing. Three daring astronauts strap themselves to a partially tested, 36-story-tall rocket and travel farther than any men ever have, beating the Soviets who had thwarted the U.S.’s attempt to be the first to put a man in orbit and appeared to have the upper hand in conquering our skies.

Like many people, I love travel. The anticipation. The exploration of new areas. The revisiting of old favorites found on previous trips. And while business travel can share some of these same positive feelings, it is also complicated by missing my wife and three kids at home. Different on this trip, though, was the realization that my cross-country travel paled in comparison to the 240,000 miles from Earth that Frank Borman, Jim Lovell, and Bill Anders traveled from their own families during the week of Christmas in 1968.

Unwittingly or not, my experience reading “Rocket Men” changed how I experienced Rail~Volution. I couldn’t help but be shaped by the experience of these brave men who were themselves shaped by the unique time and the situation around them. In 1968 America, there was dissatisfaction with the ongoing Vietnam War, simmering racial tension, and assassinations of generational leaders Martin Luther King, Jr. and Robert F. Kennedy. And, finally, hanging over all of this was the lingering promise--and pressure--of the late President John F. Kennedy, who had ambitiously committed the U.S. to put a man on the moon prior to the end of the decade.

So, with this simultaneously challenging and inspiring story from “Rocket Men” serving as a backdrop, I arrived in Vancouver for Rail~Volution. Replacing the moonshot as the collective pressure towering over us, we now have our world’s climate crisis. In this sense, Vancouver served as a perfect host with its amazing density along its transit lines showing what’s possible to achieve Rail~Volution’s mission of  “building livable communities through transit.” In a keynote address, Congressman Earl Blumenaur--one of Rail~Volution’s board of directors and early supporters--proudly touted Portland, Oregon’s Clean Energy Community Benefits Fund that “offers a community-led vision, grounded in justice and equity, that builds citywide resilience and opportunity” around climate issues. And yet, the presentations and hallway conversations at the conference also highlighted many other situations where communities are not making material progress towards resolving this existential crisis. Why?

For me, it seems like the barrier is a lack of clear goals and values.  While the 1960s were a tumultuous time, President Kennedy articulated a clear goal to send a man to the moon and return him safely, a goal that he reinforced both publicly and was repeated back to him apocryphally. Back in the present, as shared by one of the Rail~Volution keynote speakers, Jonathan Coté, the mayor of New Westminster and chair of the regional mayor’s council, cited Vancouver’s rejection of a freeway serving the downtown area as a critical element that reinforced Vancouver’s desire for mobility to mean something different. In the 1970s, shortly after both the Apollo 8 mission and urban renewal in the U.S. that scarred our inner cities with miles of asphalt, Vancouver rejected the highway and this top-down approach to city-building. Instead, Vancouver’s values embraced a community and neighborhood-driven approach to planning that largely continues to this day. This mindful approach has resulted in over 50% of Vancouver trips being made on foot, bike, or transit, an astounding commitment to low-impact movement around the community. The importance of values didn’t end at the community level. CEOs of transit agencies in Seattle, Portland, Las Vegas, and Vancouver also expressed the importance of clear values for their teams in the session “Innovate or Die.”

A huge emphasis at Rail~Volution was the importance of equity, not only in the planning of transit and housing projects, but in the recognition of historical injustices. The conference opened with Carleen Thomas, a representative of the Tsleil-Waututh Nation that has inhabited the lands surrounding Vancouver for generations, giving a blessing for the conference. This theme continued throughout the conference as Member of the Legislative Assembly Bowinn Ma greeted the conference and Andrea Reimer, a former Vancouver city councillor, highlighted that we have to define who we want to work for and what community means. The vibrant texture of the conference agenda included a diverse set of speakers that reflected the diversity of our cities and earned the conference a Silver Stamp of Approval from Gender Avenger, with 47% women speakers, 40% of whom were women of color.

This theme of equity wasn’t tackled so directly in “Rocket Men.” During this time, NASA and its feeder systems of the military and aviation were mostly white males. Still, despite this historical limitation, what the Apollo 8 mission and Rail~Volution conference shared as it relates to equity was a definitive acknowledgement of reality, of what is. In space, ignoring critical information or refusing to acknowledge uncomfortable issues can be the difference between life and death. Similarly, today, we have to acknowledge the real issues of race, income inequality, and housing policy to make true advances on equitable transportation and livable communities.

This may be Rail~Volution’s greatest strength: the ability to tackle these meaningful topics in an environment where so many dedicated people are committed to solving them. While we won’t solve the climate crisis before next year’s Rail~Volution in Miami, with direct conversations about our values and an honest accounting of where we really stand, we have a (moon)shot.

Download our latest white paper to learn how TransLoc is reducing barriers to access and energizing communities with our OnDemand product!