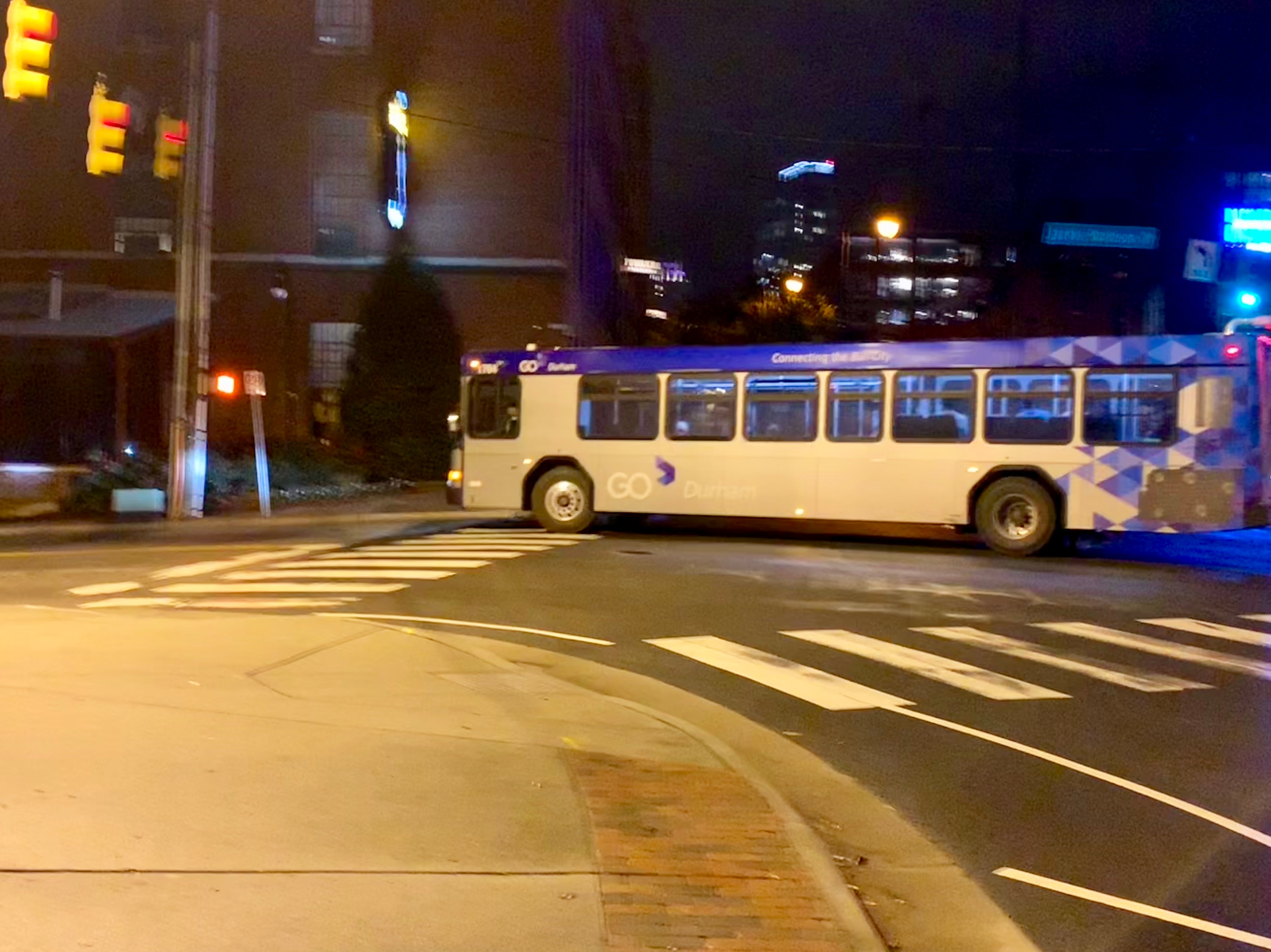 My early morning runs take me from my sleepy, dark neighborhood streets out to the comparatively brighter main roads before I end up in downtown Durham, surrounded by bright streetlights and office buildings.

Last week before Daylight Saving Time made the mornings lighter, as I approached the American Tobacco Historic District, a GoDurham bus passed me on its way to the nearby Durham Transportation Center at the north end of American Tobacco. I only got a brief glimpse in the window, but a couple things struck me.

The first thing that struck me was how full the bus was at 6:20 a.m., which probably shouldn’t be surprising given GoDurham is one of the state’s most productive transit systems. The other thing that struck me was the racial diversity on the bus. There were people of all colors on the bus that early in the morning, undoubtedly on their way to downtown jobs or to transfer to other local and regional buses at the Durham Transportation Center.

What I didn’t see in my admittedly quick glance at the passing bus, though, was anyone dressed in suits. Sure, it was early. And hardly anyone wears suits anymore. And appearances can obviously be deceiving, especially since I often wear jeans and a hoodie to work. Still, the data show that GoDurham is not only one of the state’s most productive systems, but also one where a majority of riders have household incomes of less than $15,000.

So, why does this matter? It matters because for transit to work well, it needs to be for everyone. When income and mode choices cause some to have a transportation experience that doesn’t expose them to others--say, by always driving your own car--it’s too easy to create divisions around mobility, something that I--and others--believe is a fundamental human right.

Like the previous millennia where the world’s best cities prospered because their location on water allowed for movement, the success of cities in the next century will be dependent almost exclusively on mobility. Whether Paris, Texas or Paris, France, your community’s access to mobility will define whether your city prospers.

The Washington DC Metro has been under the gun for a few years now. They had a major train collision in 2009 that killed nine people. Deferred maintenance required shutting down portions of lines for extended periods, further challenging commutes. And ridership has fallen precipitously over the past few years, leading many to worry that a death spiral is not far behind.

After WMATA struck an unprecedented deal with their three major funders (the District of Columbia, Virginia, and Maryland), it appeared that WMATA had finally found some stable footing to attack these problems.

But this week, as WMATA released draft ideas on how to improve service, including expanding service during rush hour, capping fares on the weekend, and expanding their rush hour guarantee if riders experience delays, they found the proposal left some cold. DC Council Member Charles Allen wants WMATA leadership "to see themselves as doing more than operating a daytime commuter rail service, but rather, a regional transportation system that connects people and neighborhoods."

The proposal that Council Member Allen is bemoaning is one that prioritizes white collar workers working a standard 9 - 5 schedule. Others went further, calling the extension of rush hour into the evening as one that will primarily benefit office workers returning from happy hours over providing late night service and bus connections that would serve the service industry workers who are serving those cubicle dwellers their cocktails.

This distinction is critical. Something as central to our lives as mobility requires diversity of all stripes. It may be difficult for those in power to appreciate the challenges of those who have different mobility needs then they do. That’s why the best transit agencies require their transit administrators to ride transit on a regular basis.

Nothing beats experiencing the frustration of watching buses creep through traffic because high-capacity transport is not prioritized. Or seeing a disabled individual have to wait 25 minutes for the next bus because she missed her infrequent connection. Or finding yourself confused by an outdated transit schedule that no one bothered to remove when service changed last year. The empathy created from this experience is critical to ensure that transit works for everyone.

I walk the mile from my downtown Columbus hotel to Cleve Ricksecker’s office on a chilly and wet late April morning. While we had never met, Cleve is someone who could be described as “easy to know.” Within just a few minutes of sitting down in his small office, Cleve and I were laughing over some of his exploits during his 18 years as the executive director of the Capital Crossroads Special Improvement District.

I was sitting in Cleve’s office because he was the architect behind an innovative plan to give free bus passes to 45,000 downtown Columbus office workers, all in the hope to get 5% of those workers to choose transit over driving. If they can do this, they will avoid having to build 2,250 spaces in new parking garages in downtown Columbus, a $50+ million investment no one is particularly eager to make.

As a downtown Columbus resident and someone who has lived the vast majority of his life without a car, Cleve has ridden on his fair share of buses in Columbus. And in my brief time in Columbus riding their local transit authority COTA, their riders looked like Durham’s, if not a little younger and a few more suits. Still, Cleve believes many people in Columbus perceive COTA as a social service.

And as Cleve peers across his cluttered desk, he gives me a wry grin. While one benefit of this project will undoubtedly benefit the major commercial real estate firms that funded the distribution of these free bus passes for downtown workers and who don’t have to build new parking garages, Cleve sees another major beneficiary: the community. Instead of the community seeing public transit as a social service, Cleve hopes that this program will help to normalize transit in Columbus by encouraging more office workers to mingle with the maintenance workers, baristas, and tradesman who rely on Columbus’ public transit system every day.

Back in Durham, the city is basking in the glow of a $1 million grant announced by the Bloomberg Philanthropies US Mayors Challenge to use social science to encourage single occupancy vehicles off the streets. Their goals are pragmatic: “to get drivers out of their cars and into alternative modes of transit.” I hope they are successful, not only because we will experience less congestion and pollution, but because more people with means will be riding the bus, gaining empathy for that experience and ensuring that our mode choice reinforces that mobility is a human right.

Until then, I’ll keep my eyes open--on my early morning runs and otherwise---to see how well our entire community utilizes our public transportation system that exists to serve it.

Josh Cohen is TransLoc's National Director of Policy, and an avid bus rider.