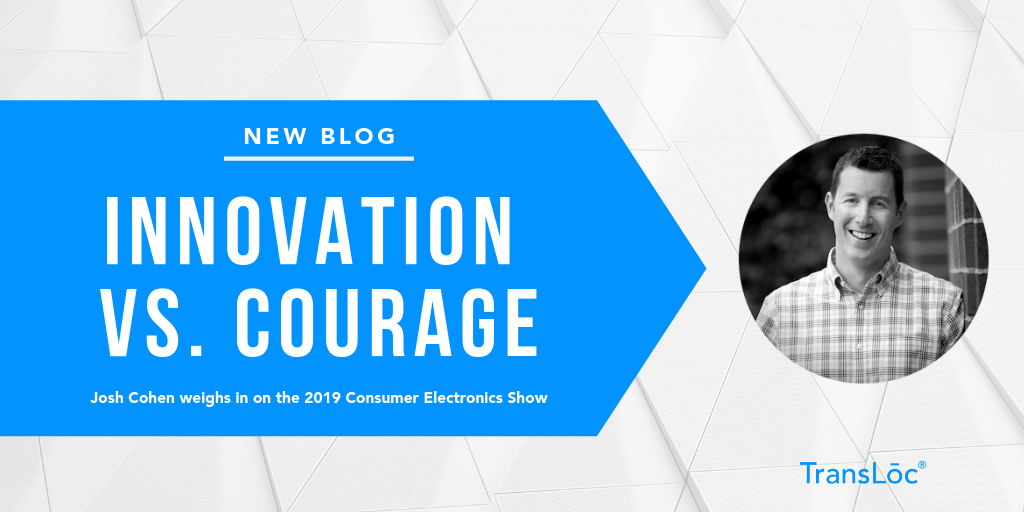 It’s that time of the year again when the headlines hitting the news are full of hyperbole and dubious practicality generated from the annual paean to the newest technology, the Consumer Electronics Show in Las Vegas. The transportation industry was not spared from the CES headlines with debuts of walking cars and flying cabs. 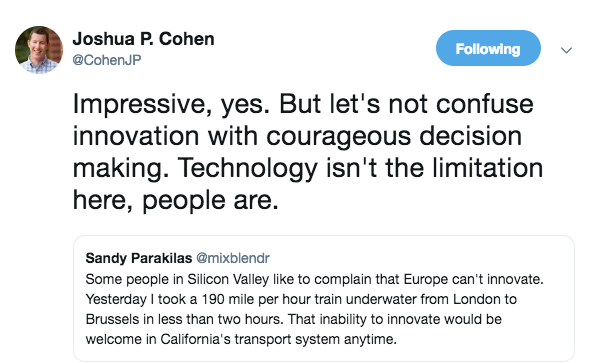 What’s holding us back from the world we want? Is it a lack of innovation as this tweet suggests? I don’t think so. The US has some of the most innovative minds in the world. And if you’ve been overseas, you know that many other cities and countries have great technology, too.

In fact, instead of a lack of innovation, I think we suffer from the opposite problem: a fundamental misapplication of technology. Many stakeholders misuse technology to avoid dealing with problems that could more easily and directly solved with courageous decision making. Don’t get me wrong; technology is great. But, because of the immense power of technology, it must be used correctly.

In the transportation space, here are three ways that people abuse technology and innovation to avoid making the hard decisions that are necessary to get us to where we actually need to go.

Misapplication #1: Technology will save us

Many people are willingly or unwillingly viewing technology as a savior, giving them an excuse to avoid making those tough decisions today.

Exhibit A: “We don’t have to invest in public transit, the AVs are coming. They’ll solve all of our problems!”

Rather than elected officials taking a stand to allocate funds for a robust transportation system or putting transportation investments on the ballot, some stakeholders in communities are resisting doing so because they think that the still unproven technology of automated vehicles will make it unnecessary.

This not only ignores the geometry necessary to make our cities work but also overlooks the reality that it may be another generation before autonomous vehicles are at scale, according to the CEO of Waymo, the company that has logged more autonomous miles than any other company.

Misapplication #2: Technology as justification for procrastination

The opposite of technology being a savior is it being the justification for procrastination. At a recent transportation industry event, I heard a transit agency official mention how his agency has resisted investing in electric buses while they are waiting for the technology to get better.

This official is not alone. Other agencies have taken a similar approach, saying they don’t want a science project. The cynical side of me says that often those in power use technology as a stalking horse. There’s always more technology coming down the road sometime and, because of that, those with the power to make decisions can use technology as the reason for not making them. And because of the very nature of technology, it will both get better tomorrow and potentially become obsolete, both further reasons for stakeholders to avoid making courageous decisions today.

As Albuquerque’s disaster of a Bus Rapid Transit launch has certainly shown with the range of their articulated electric buses, sometimes technology is not ready for primetime. But that doesn’t mean that all technology--or even all electric buses--is bad. Again, the failure here is not necessarily with the technology, but with the decision making. Officials need to prioritize technology providers who will work together with the agency and projects with clear expectations and process to mitigate this risk.

Christof Spieler’s Trains, Buses, & People is a fascinating look at all of the transit infrastructure in the US. In a recent profile of the book by Vox, Spieler notes:

You should start with saying, “This is the kind of service we want to provide,” and see what technology can do that, rather than start by saying, “Here, we have this new technology, what could it be good for?” The technology isn’t the goal; it’s the service.

Communities get out of step when they depend too much on technology and fetishize it as a cure-all. This is especially difficult for communities to interpret as technology companies put marketing spin on their latest features and innovations.

Chicago’s willingness to spend time on high-speed rail between O’Hare International Airport and downtown Chicago--a route that largely parallels existing Chicago Transit Authority service--is a prime example of the folly of this thinking. Mayor Rahm Emanuel and former Mayor Richard M. Daley have diverted public attention and staff time towards a fetish instead of making the less sexy, but more practical decision to invest in the existing, but challenged transportation network that serves millions of people a day.

In the end, technology should not be a fetish, nor a procrastination tool, nor a savior. Instead, it’s a means to an end, not the end itself. And when stakeholders get confused and think that technology is the end, they tend to avoid making the hard decisions that we need stakeholders with limited resources to make.

And like those fancy air taxis at CES that still have to deal with such prosaic things like gravity, the only way forward to achieve the green, accessible and equitable world we want is to make the bold and often challenging decisions that will get us where we want to go. Will technology be a part of that? Of course, but only a part. Until then, let’s remember that the only barrier to our future is courage, not innovation.

Learn what questions you should ask to make technology work for your agency by downloading A Human’s Guide to Shopping for Microtransit today!