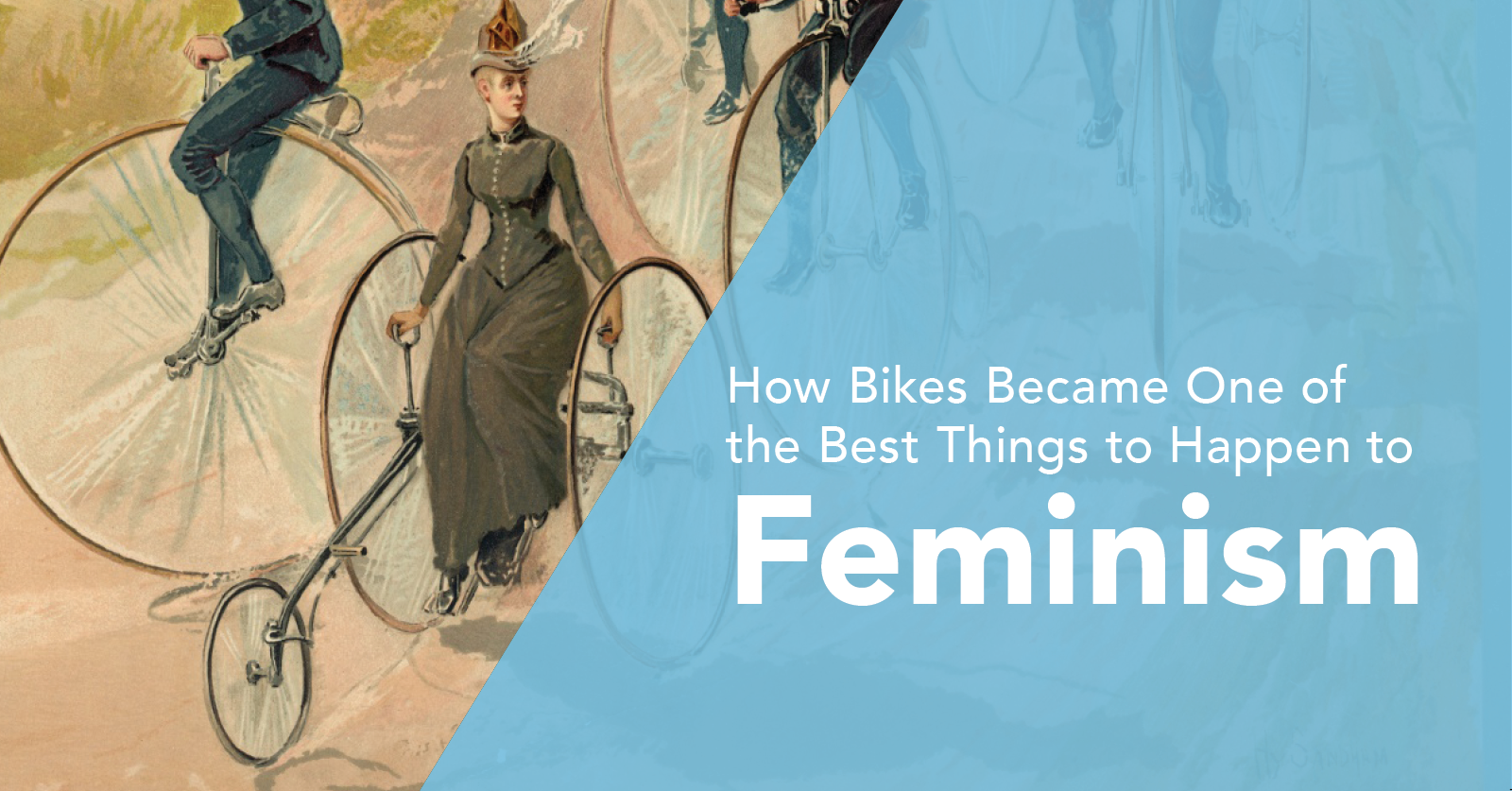 Today we celebrate the ratification of the 19th amendment to the United States’ constitution giving women the right to vote. While voting is arguably one of the greatest equalizers in our nation, women’s mobility — bicycles specifically — liberated women and established greater equality across various domains including fashion and commerce, health and recreation, gender roles and relationships, politics, race, and socioeconomics. Much of this continues to impact women’s lives today.

Early biking
The ordinary, also known as the penny farthing, was invented in the 1870s and popular by the 1880s. With wheels up to 5 feet, it was primarily used for recreation by men. If one of those wheels hit a rock, a rider could easily find himself falling head-first. Headers often resulted in serious injuries or death.

By the mid-1880s, as the ordinary gained momentum, John Kemp Starley invented the rover safety frame, which quickly took over in popularity. The gear helped with speed and, as the name suggests, safety. Women began riding, only to find that their petticoats or skirts could get caught in the spokes and bring them to injury or even death.

Fashion and commerce
Luckily, the rise of bicycles happened in the middle of the Progressive Era, when women were fighting for rights throughout society. The rational dress movement began in the late 19th century when women were constrained to corsets and skirts. Women began testing the limits of fashion starting with what they were wearing while riding.

Women first wore stockings under their skirts for easier riding, but trends transitioned to wearing men’s clothes or bloomers. This kind of fashion varied for a period of time and came with a lot of rules. One list, published in 1895 in the newspaper New York World, included “Don’t discuss bloomers with every man you know.” In fact, it was technically illegal for women to wear pants in Paris, unless they were "holding a bicycle handlebar or the reins of a horse” until 2013.

Bike ads were among the first to claim that buying something could improve your life — by, for instance, helping you get a date, or impressing the neighbors. Companies specifically targeted women for their clothing and bicycle needs, considering what was in the “sphere of women” such as motherhood or house making.

Women’s health
Women were taking on core values of society and many men and women were unhappy, claiming that bicycling was an excessively taxing activity, unsuitable for women. It would lead to exhaustion, insomnia, heart palpitations, headaches, and depression, or a condition called “bicycle face.” The symptoms female riders’ were told they’d experience included paleness, flushed face, and dark shadows.

Cyclists were also believed to be prone to female health issues through the aid of bicycle seats. Sexual impropriety was linked to cycling, not just in the form of, as Dr. Garrigues put it, the “intimate massage” of the saddle, but by its association with “fast” or “scorching” women, a double entendre suggesting loose sexual morals.

As we now know, the bike actually did good. This reaction introduced a new strain of skepticism that helped to modernize American medicine. American racer Elsa von Blumen said in 1881, “Success in life depends as much upon a vigorous and healthy body as upon a clear and active mind.” And in 1895, Annie “Londonderry” Cohen Kopchovsky became the first woman to cycle around the world; it took her just 15 months.

Changing societal norms
Author Henry James coined the phrase “New Woman” to represent the modern, confident, athletic, and self-reliant woman of the time, who was almost exclusively shown with a bicycle.

“Many [female cyclists on cigar box labels] were shown as decidedly masculine with hair cut short or pulled back, and smoking cigars, then an almost exclusively male pursuit,” commented Sue Macy, author of “Wheels of Change: How Women Rode the Bicycle to Freedom.” “This portrayal reflected the old fears that women in pants would somehow supplement men as breadwinners and decision-makers.”

Women, once needing chaperones, were allowed to ride bicycles with suitors. Young couples were warned about the potential dangers, many considering the bike as a tool that threatened chastity and order, yet society had already started to change. The song “Daisy Bell”—recorded in 1892 by then popular British songwriter Harry Dacre—has a verse that describes working in “tandem” in both riding and in the relationship.

Men already had cycling groups, the most popular being the League of American Wheelman, or LAW, established in 1880, but the first exclusively women’s group was started in Washington, D.C., by Harriette Mills in 1888. Women who were previously bound inside, started going out together or in co-ed groups.

Suffragists and other political movements
Very quickly, bicycles became a political tool. Even before women could vote, they were at the forefront of the temperance and instrumental in the 18th constitutional amendment, prohibiting alcohol.

Frances Willard, national president of Woman's Christian Temperance Union (WCTU) in 1879, did many instrumental (and wonderful things) such as advocating for women’s education, and played a key role in passing labor reforms, including the eight-hour work day. Willard also wrote the book “A Wheel within a Wheel: How I Learned to Ride the Bicycle” about learning to ride late in life and actively encouraged other women to ride. She called for more sensible and practical fashion for female bicyclists, and claimed bicycles were the perfect mode of transportation not only for women, but also in the fight for temperance, as riding drunk is very difficult.

As women gained more self-reliance and independence by riding, suffragist leaders such as Susan B. Anthony and Elizabeth Cady Stanton argued that women were more likely to advocate for the vote, especially as they lobbied beside men for paved roads and other cyclists’ interests.

While some lamented the immorality of bicycles, especially as riding became a popular Sunday activity and people didn’t attend church, others used it to promote Christianity in the U.S. Bikes became tools for evangelizing the Gospel. Women joined the Salvation Army’s bicycle corps. But not all women had it easy.

Bicycles amplifying privilege and bias
Black woman met resistance in ways their white counterparts didn’t. Kittie Knox joined the League for American Wheelmen in 1893. When the group tried to ban African-American members the following year, she mounted a protest at its annual meeting. The segregationists won that round, but her activism forced open the question of who was allowed to be a part of the cycling world, and black women continued to embrace cycling where they could.

By the mid-1890s, the cost of bicycles had decreased roughly 30% to around $100, with an annual income per capita of $1,000. In 1897, an estimated two million bikes were sold in the U.S. While it provided more women the opportunity to ride, it was primarily assisting upper and middle-class white women – those that could afford the cost of a bicycle, and the clothing and maintenance.

In urban settings today, the wealthy, especially white communities, have seen growth in bike commuting while there is no change to poorer communities. Straddling between transportation and pleasure, it seemed to belong equally in parks and on roads. This dual status has continued to complicate the bike’s place in urban culture. Cities tend to build bike lanes along direct commuting routes, privileging the needs of white-collar workers, or plan docked bike shares in areas of higher male employment versus female employment.

Currently, women make up just 24 percent of bike trips in the U. S. Routes that women take are regularly underserved by infrastructure that would allow the school run with kids, trips to the grocery store, or an evening spin with a group of friends.

In Philadelphia, the presence of a bike lane on a city street increased women’s ridership by 276 percent. In New York, a 2011 count showed that only 15 percent of riders on a street without a bike lane were women; on a nearby street with a dedicated lane, the percentage more than doubled. Quiet routes might have the advantage of less motor traffic but they can carry the risk of harassment.

Yet across the world, bicycles continue to be a means of liberation and access to education for women and girls. Multiple aid organizations donate bicycles to women across the world and teach these women the skills to fix their own bike so they do not have to rely on men for help.

Susan B. Anthony famously said, “Let me tell you what I think of bicycling. I think it has done more to emancipate women than anything else in the world.  I stand and rejoice every time I see a woman ride by on a wheel.”