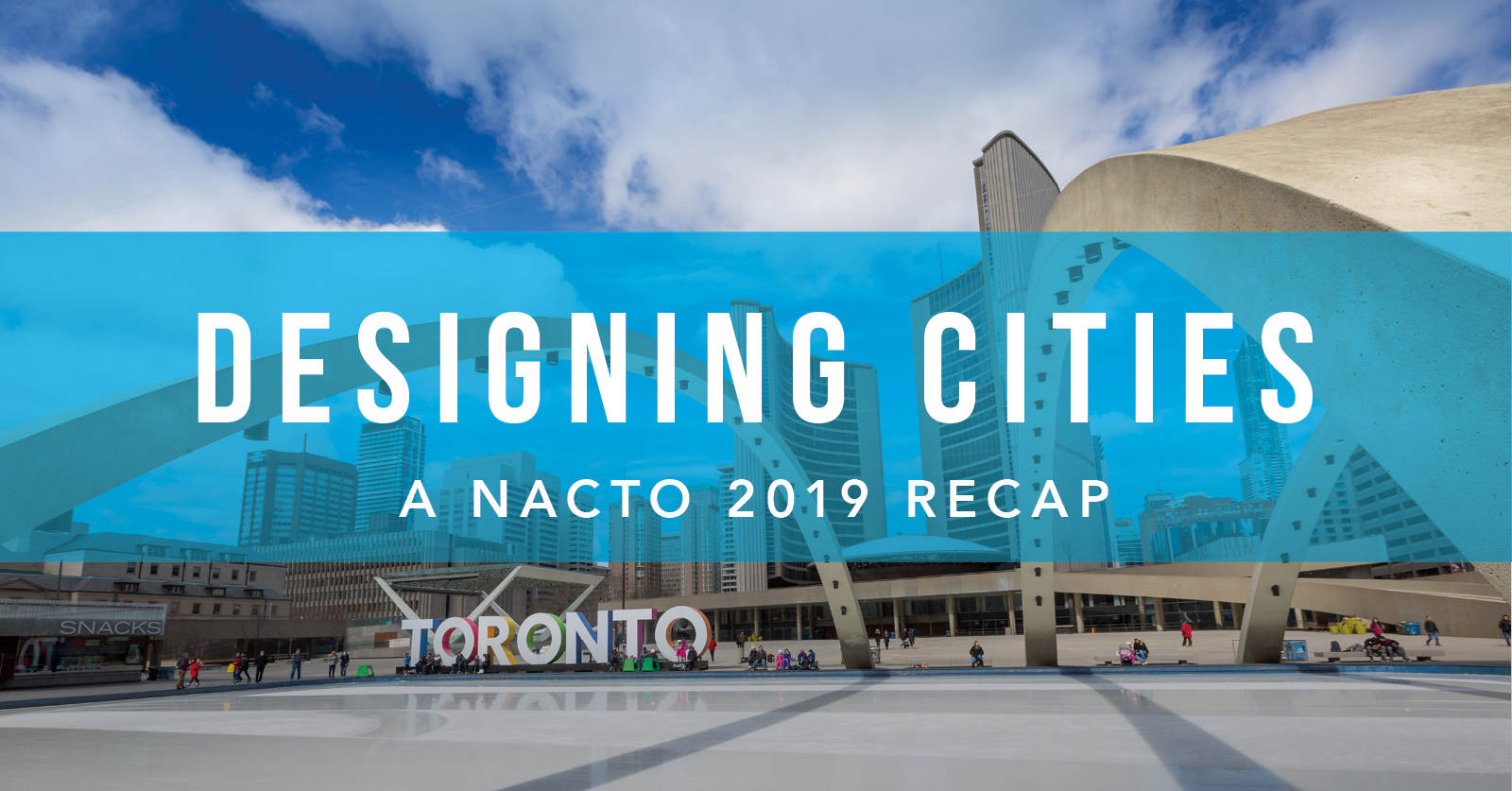 It’s been a few weeks since I was at the National Association of City Transportation Officials (NACTO) Designing Cities 2019 Conference, but I am still riding the energy waves from that event. NACTO is my happy place. It’s a chance for me to breakaway from the day-to-day at the office and let my inner urban and transit planner come out. And as someone trained in both community development and technology development, it’s a great place to watch those two parts of my world collide.

This year’s conference did not disappoint. For one, I got to catch up with some of my favorite humans working in the industry - from city planners to technology partners. This year, that included seeing an old Peace Corps buddy of mine whom I haven’t seen in 7 years - we can still speak Albanian well enough to have a basic conversation. Success. But, beyond the amazing community, this conference also provides access to amazing content and education. The topics are progressive, and the environment is engaging. The exchanges are thoughtful, and my takeaways always find their way back into my everyday work. As encouraged by Elder Cat Criger in NACTO’s opening session, “knowledge is a gift,” so let me share with you some of the gifts of NACTO 2019. 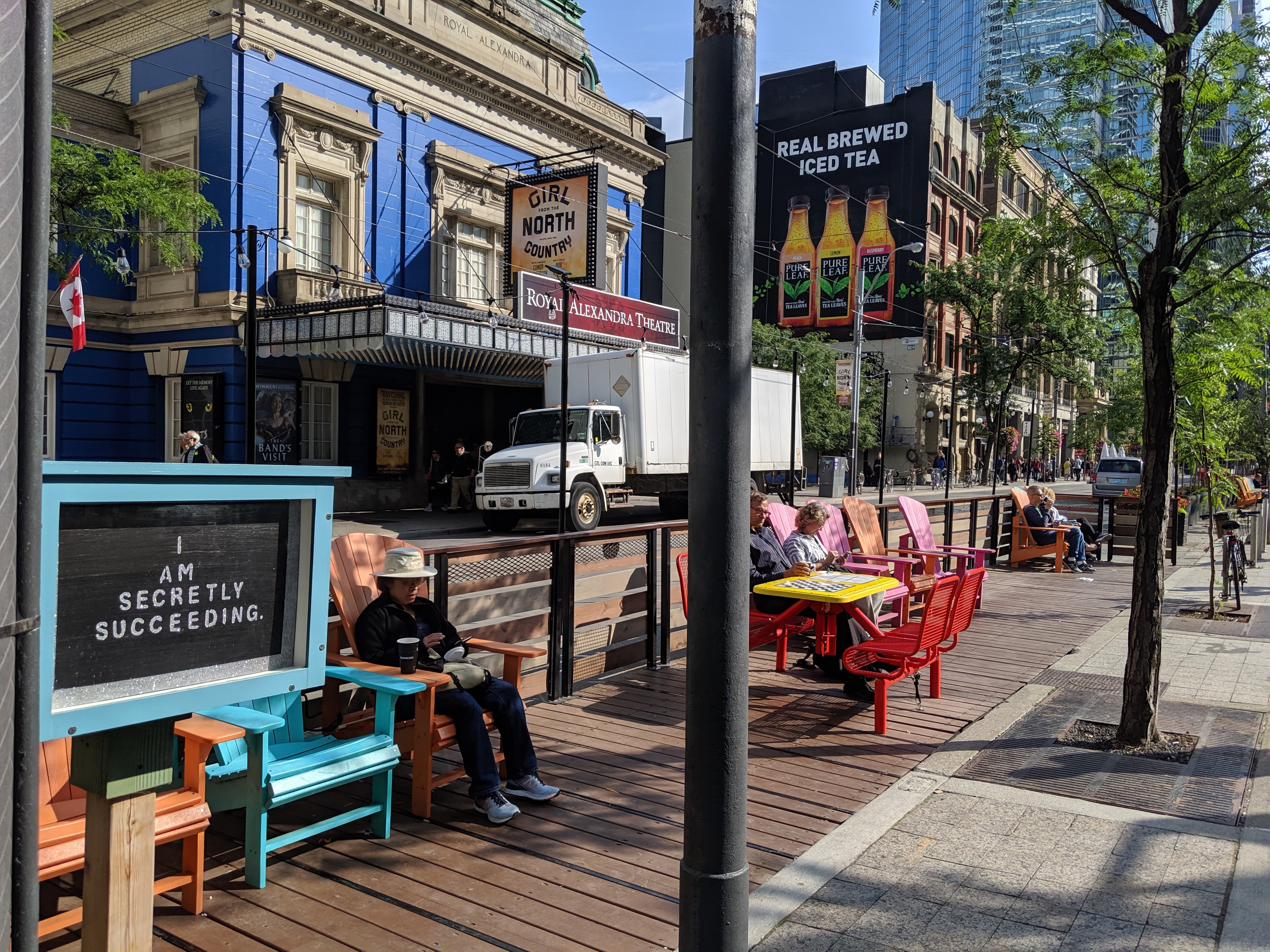 Toronto - The Six (hat tip to Drake)
I feel like there is no better place than Toronto to serve as the 2019 host city, and first Canadian host city, for this year’s NACTO conference. It was my first time in Toronto, and it did not disappoint. Toronto is Canada’s largest city and North America’s fourth largest with 2.9 million residents. Toronto is also one of the most multicultural and multiracial cities in the world, with over half of its residents having immigrated to Toronto from outside of Canada. The sum of this has made Toronto the fastest growing city in North America. With that comes growing pains, as you can imagine, affordable housing and demand for stronger transportation infrastructure, to name a few. My short time in Toronto gave me first-hand experience with city officials and planners who are solving for today’s realities with sustainable solutions aimed at the future. I appreciated their willingness to share both failures and successes; a common quality of the NACTO community. To get exposure to some of the projects being worked on in the city, I took part in NACTO’s “WalkShops” - real-world, live projects that you get to see up close to understand how concepts translate to cities’ streets. Here’s what I learned.

NACTO Walkshops
Because we haven’t solved time travel yet, or teleportation, I had to pick and choose my WalkShops wisely. The WalkShops exemplified a variety of projects - from active transit and complete streets to streets, art, and culture, and everything in between. I focused on more transit-specific projects that combined design elements from complete streets and the public realm. Here is one of my favorite WalkShops from 2019. 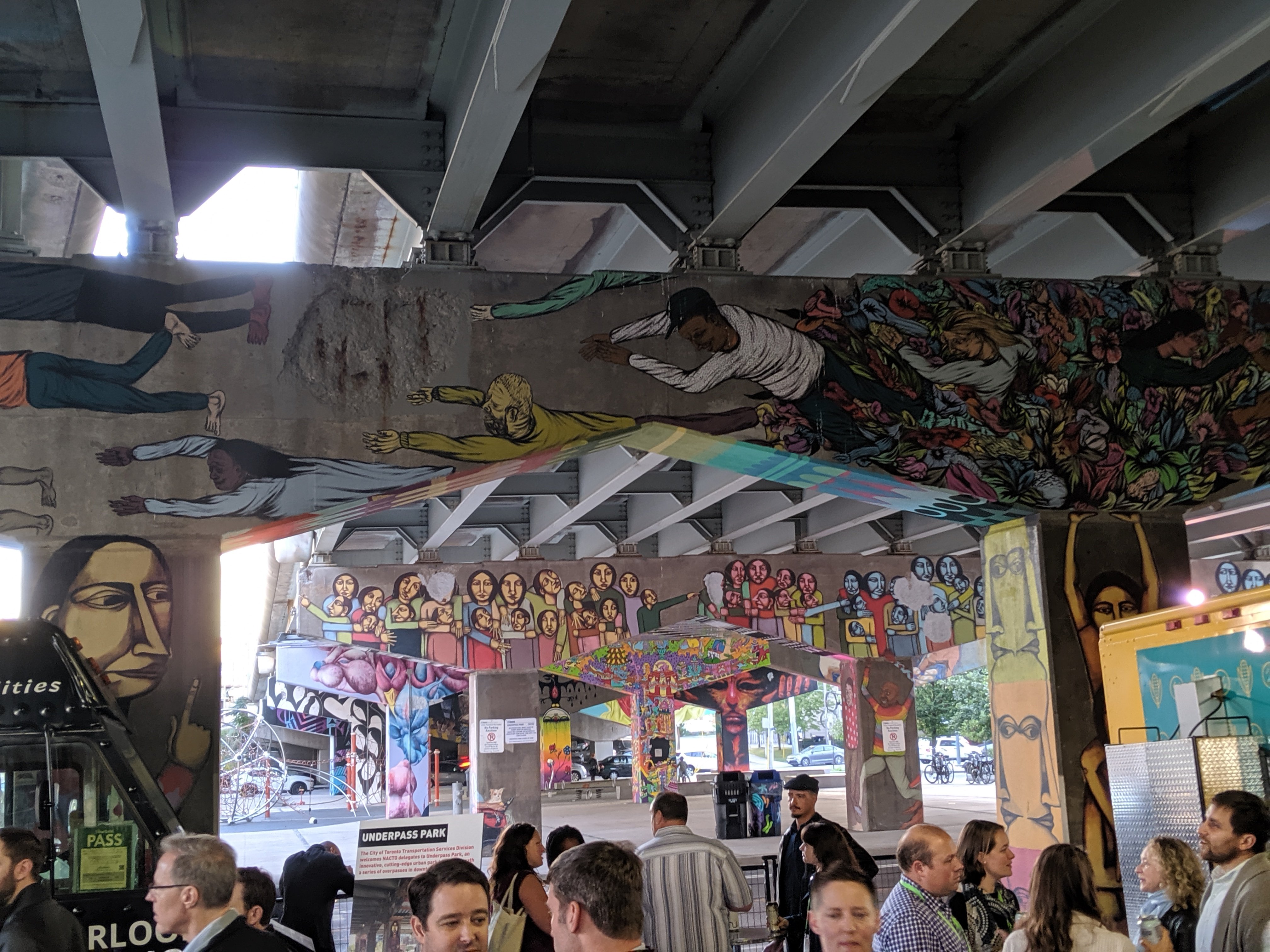 Line 504’s 180: King Street Transit Pilot
Toronto's 504 King streetcar is one of Canada's busiest surface transit routes, moving over 84,000
riders per day. The route plays an integral part in connecting the dense downtown with densifying residential neighborhoods. But, the 504 streetcar had a major problem - it was unreliable and operated consistently at or above capacity, especially during rush hours. Deep gaps and bunching of service was caused by congestion, traffic delays, and poorly timed intersections. To compound these issues, when the streetcars stopped, cars opened onto the curb lane of a street. This created safety issues for riders and added to traffic delays, as it’s illegal to pass unloading streetcars. Therefore, when a streetcar is stopped to unload, the rest of the street is also stopped. The City of Toronto and the Toronto Transit Commission embarked on a year long, $1.5 million pilot in November 2017, that gave transit priority to streetcars along a central portion of King Street. I had the opportunity to see these efforts in action in real-time. The project utilized data to inform redesign decisions and considerations around intersection improvements, impact to traffic and car volume, parking considerations, repurposing of public space, and potential impact to businesses. This was one area - their use of data - that really helped drive the pilot to a permanent fixture. The data types included GPS tracking data, beacons, cameras, pedestrian and rider volume, cycling volume, and point-of-sale data (the use of this data source was genius in my opinion). An additional takeaway was their ability to repurpose various blocks as part of this project. On-street parking spots were reclaimed for curb lane cafes, commercial loading zones, accessible loading zones, and different public space that included locally-sourced art installations. Lastly, their ability to coordinate and drive action from city stakeholders and community members provided a key ingredient to the pilot’s potential. They utilized their data to help tell the story of success. Their efforts proved worthy. After a year, transit ridership increased by 17 percent with substantial increases for the AM and PM commutes. Travel times and reliability improved to consistent times - rarely exceeding 20 minutes during the pilot, whereas prior to the pilot, times often exceed 25 minutes or longer. For a full view of their pilot metric summary check out this report. It was awesome. I took a ton of photos obsessively. As someone who understands the complexity of moving projects and data like this, it was a huge win. As of April 16, 2019, City Council made King Street a permanent Transit Priority Corridor. To find out more about this project (my brief synopsis doesn’t do it justice), check out their website and dashboards.

Key Session Themes
I’ll spare you my 15 page, single-spaced notes document from the sessions I attended. Instead, I’ll highlight some common themes that emerged in various ways, either directly as a session topic or indirectly as part of a session discussion. What’s interesting about the themes is that they also had one common overlap, a call to action for more collaboration between government agencies and private partners.

Data - I called this out above with the King Street pilot, but maximizing the value of data already available to cities and agencies provides immense opportunity. Deriving insights and effectively using data to inform decisions was a common theme for every session regardless of the session topic. Also tied up in the data theme were deep discussions around privacy and ownership of data. This isn’t surprising. It’s a topic we at TransLoc focus on as well - especially as it relates to open data standards and privacy. A rallying call was signaled around improving data policy and transparency in cities in the wake of fast moving tech. Data also played the role of ‘great equalizer’ in many conversations. Equalizer in the sense that it can create a shared, common language between public and private entities, but to achieve this a fair balance between these stakeholders needs to exist.

Equity - Cities and agencies are embracing new technologies and access to information in a way never seen before. This has become a catalyst for changes within city Departments of Transportation and transit agencies, as communities look to evolve their mobility services for their residents. Communities have a chance to right wrongs that occurred with past city planning efforts by focusing on equity in their redesigns. This emphasis on equity is a part of the work happening on projects such as bus network redesigns, as discussed by planners in Charlotte and Philadelphia, to fare structuring initiatives at San Francisco Municipal Transportation Agency to the inequality caused by multiple transfer points. Equity is more encompassing than box checking of the federal Title VI statute; it requires systematic considerations from housing and land use policies to transit project funding.

Shared vision and collaboration - I am not sure a transit or city planner would describe this as such, but a major theme I observed in conversations and sessions was the desire for more coordination of cross-functional efforts between various departments, especially around planning. A lot of that has to do with two key components. One, a shared vision for mobility for a community that’s inclusive of all departments or organizations working on transportation and transit - from the city DOT to the public transit agency. Second, is using that vision to drive collaboration amongst departments that impact either directly or indirectly the mobility ecosystem of that community. The value chain of delivering seamless, integrated mobility in a community is stretched across multiple functions, departments, funding streams, and ownership. Strong community leadership, from the mayor to the transit boards, is needed to set the expectation for delivering cleaner, clearer, and more successful mobility outcomes across varying city entities - from planners to street maintenance crews. 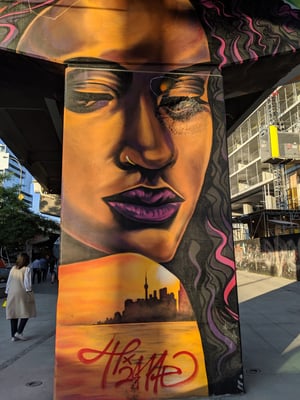 I look forward to continuing conversations with cities and transit agencies started at NACTO. We want to partner with these groups to help them realize the ideas expressed at the conference for their communities. One thing I knew I wanted to bring back to Durham is the awesome street-art scene that Toronto has enabled called #StreetARToronto. It’s an incredible way to turn public streets, laneways, and parks into a city-wide art gallery, and it’s a collaboration between the City of Toronto, Transportation Services, and Public Realm stakeholders. Vision and collaboration - the key to a vibrant city.